La Villa Strangiato is an Italian project as a tribute to Rush, primarily to revive their music from the 70’s and 80’s, formed by Gabriele Ferrari in 2010. With the help of musician friends, they performed their 1st show in Rome in March 2011, dedicated to the album ‘Exit Stage Left’. Having gone from strength to strength playing around Europe and headlining Rush EuCon (the European Fan Convention) in the UK in 2014, and with the 40th anniversary of Rush on record in 2015 they toured Europe, the production dedicated as ‘Rush 40. In 2016 LVS toured ‘Signals Under Pressure’ and were invited to play at Rushest in Scotland, with original Rush producer Terry Brown amongst the audience. In 2017 the tour was in tribute to ‘2112’ and at Rush EuCon they once again played to Terry Brown. 2018 was the ‘Stranger Spheres’ (Hemispheres) tour and 2019 ‘A Show Of Hands’ . For 2020 they had prepared ‘Permanent Changes’ but after only a few shows the tour was postponed………..resuming mid 2021 until end 2022.

The band will be going on the road again from 2023 on Different Stages through
Europe, expect many fan favourites, some surprises (and a special guest or 2…….) 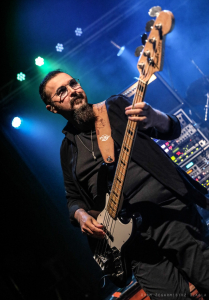 "Bibbi" was born in Rome in 1977 and already as a child he became curious and passionate about Rock and Progressive music, listening to old family albums.
At the age of 11 he discovers a Hagstrom bass under his parents’ bed bought by his father many years earlier, a bass he still owns, now unrecognizable, massacred by numerous youthful alterations, and he falls madly in love with that instrument, starting to study as an autodidact.
At the age of 15, at the Castle of Rome for the Emergenza Rock event, he performed his first real live show. A versatile bassist, he expresses himself in various musical genres, collaborating with many bands and musicians to whom he owes a lot for his professional growth and for his breakthrough as a multi-instrumentalist.
In 2004 he realizes the dream of a lifetime by paying homage to his heart band, RUSH, first as a bass player in the Roman band "Snowdogs" and subsequently - from 2010, the year in which he founded LA VILLA STRANGIATO - in the multi-instrumental "role" of Geddy Lee .
Although Rush is his favorite band, his bass idol is the late Chris Squire of Yes; since 2009, in fact, he has had the privilege of emulating its unique sound and charisma as part of the band "Yessongs Italy", the first band with which he has trod international soil.
He loves to eat and drink a lot and he doesn’t hide it, he speaks English with a "Roman" accent, something very dear to his friends in the United Kingdom, and he is obsessed with hair loss 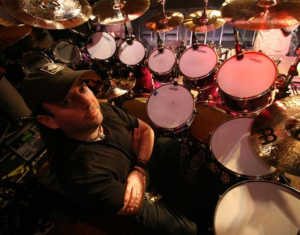 Dave Mackintosh was born in the Seventies in the United Kingdom and has mostly resided in Huntingdonshire. He starts playing the drums at the tender age of eight, and already at twelve he discovered the use of the double bass drum, which will lead him professionally to devote himself mainly to metal music. Over the years he performs and records with many bands and different projects without official recognition, experience thanks to which he greatly improves his musical ability and finds his calling as an artist. These years prove to be fundamental in his future in the world of entertainment. From 1998 to 2003 he was part of the English “symphonic black metal” band founded in Yorkshire, BAL-SAGOTH, with which he recorded two albums; later he joined the famous band "DRAGONFORCE" with which he recorded their most successful album and performed on many tours, traveling the world. In 2014 he left the band to devote himself to his first musical love, progressive rock. Among his main influences are Neil Peart, Mercury Caronia, Mike Portnoy, Tommy Aldridge, Charlie Benante, Ingo Schwichtenberg, Nicko McBrain, Jonny Maudling and Vinnie Paul. 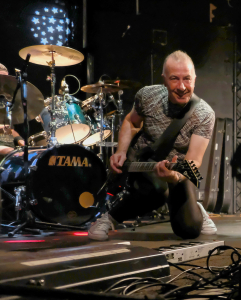 Neil M Smith was born in Yorkshire, England and still terrorises a small village near the city of Doncaster. He started playing guitar around the age of 11 but doesn’t remember why. His musical influences range from progressive to classic rock and jazz. Over the course of his long life (assumed to be around 1000 years old) he has listened to and absorbed every form of music since his teens - in the early 70s - drawing inspiration from T. Rex, Roxy Music, David Bowie, Procol Harum and Yes.
He can often be seen knitting spaghetti and hand gliding with oak tables.
Always smiling and with his typical humour, he sums up his life thus:
1. No chocolate biscuits are safe.
2. Aliens abducted him and returned him straight away as they didn’t feel safe.
3. The guard wire on his fence at home is to keep him in.
4. he Has two arms and two legs.
5. he Doesn’t understand Italian.
6. lui Was forced to play in LVS as Gabrielle B. Ferrari obtained blackmail photos of Neil at garden
parties wearing white summer trousers and playing croquet.
7. he Only recently realized that he had to tune guitars after they left the shop.
8. he Never wanted to play guitar for a living, always wanted to be a lumberjack, leaping from tree to
tree…
9. Never put cheese next to onions in the fridge, that‘s nothing to do with Neil, it’s just to make up
the ten items about Neil…
10. Neil simply can’t count.
11. There is no 11 as only 10 things were required.

La Villa Strangiato
Scroll to top
Manage Cookie Consent
To provide the best experiences, we use technologies like cookies to store and/or access device information. Consenting to these technologies will allow us to process data such as browsing behavior or unique IDs on this site. Not consenting or withdrawing consent, may adversely affect certain features and functions.
Manage options Manage services Manage vendors Read more about these purposes
View preferences
{title} {title} {title}